The Chamber of Magnesia is a Public Entity which has been established in this form since 1988, after the consolidation of the two former Chambers (Chamber of Commerce and Industry and Chamber of Professions and Handcrafts).
Its services are provided to the region of Magnesia and North Sporades Islands: Skiathos, Skopelos, Alonissos, in the district of Thessaly, which is situated in Central Greece.
Throughout the years of its operation, the Chamber has been associated with every important financial and business event in Magnesia via a large number of activities which aim at:
- the effective operation as a public entity as far as financial, developmental and promotional issues are concerned regarding the companies.
- the effective service of its thousands of members on the basis of a modern conception for support and guidance.
The Chamber of Magnesia is a public entity under the supervision of the Ministry of the Development, Competitiveness, Infrastructure, Transportation and Networking. It is divided in 3 sections, which are: commerce, handicraft, services and numbers nearly 15.300 members. Around 131 of these companies have exporting activities within EU and foreign markets.
The members are categorized into four different departments (department of trade, department of industry, department of tourism and department of services), according to its main business activity.

The Greek legislation has given to the Chamber of Magnesia financial self-reliance and administrative independence, which are both necessary for the achievement of its goals, which according to the Law 3419/2005 are:
- the protection and development of trade, industry, professions, services and exports according to the benefit and progress of the National Economy.
- the provision to the State of consulting proposals for every financial issue, including law bills
- the provision to its members and every interested person, body etc of consulting proposals for every financial issue.

Some of the most important responsibilities of our chamber are:
- consulting the government and other services on various subjects
- granting certificate of registration to our members, providing information about foreign markets, international financial developments etc.
- keeping the General Commercial Registry and granting the necessary certifications
- organizing exhibition shows, conferences, meetings and seminars 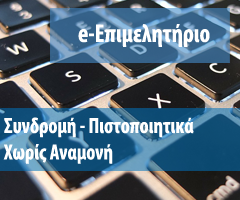